The origins of Sagrada Familia or how a universal work begins

The origins of Sagrada Familia, one of the most famous temples in the world

The origins of Sagrada Familia are around 1866 when a congregation of devotees of St. Joseph had the idea of building a temple in his honor. The first stone was laid in 1882, on March 19, the feast of San José, in the middle of a land of 12,000 square meters. The first architect was Don Francisco de Paula del Villar y Lozano but soon abandoned the project because of disagreements. 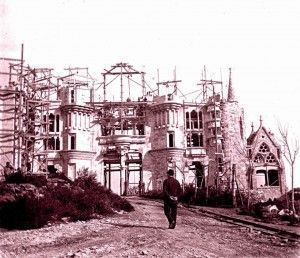 A year later Antonio Gaudi took the direction of the works. And he began to unfold a dream between human and divine. Gaudí died in 1926 right on time to finisht the first of the eighteen towers that will be build and the end of the construction, estimated in 2026. The Coonstruction began from the neo-Gothic crypt. But Gaudi revisited the design. In his hands, the Gothic would merge with the Art Noveau creating a personal and inimitable style.

The first was the facade of the Nativity

Like a page in stone, it summarizes the biblical episode in a pictoric way. Full of symbolism, the project is a great catechism from the conceptual point of view. Gaudí conceived this facade of traditional forms mixed with bold architectural innovations. During the origins of Sagrada Familia, he set up his workshop and the space in which lived the last years of his life inside the construction site. Since 1912 to 1926 (the year of his death), the author of La Pedrera and Park Guell only worked on the Sagrada Familia. He built as well the Temporary Schools for the education of children in the neighborhood and construction workers.

In 1930 the bell towers of the Nativity façade were finished and in 1933 the portal of the Faith and the central cypress were completed. 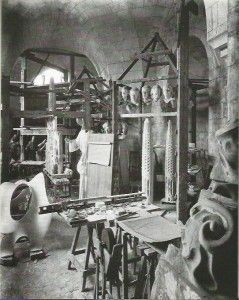 At the origins of Sagrada Familia, Antoni Gaudi spent hours building models that were themselves a work of art. They were used as a miniature laboratory to rehearse his new constructive ideas. With the help of modern computers, the restoration of the remains of these models is what helps us today to imagin what Gaudí wanted.

After the death of the architect, the construction of the basilica continued to advance very slowly. In just ten years Spain would be immersed in a Civil War with huge consequences for the Sagrada Familia: some of the designs were lost in a fire. Three generations of architects have been needed to rebuild the project’s DNA.

Tourists in the Sagrada Familia, art and faith

From the beginning it is an expiatory temple which means that the cost of the work was paid by voluntary donations. Today, thanks to the large influx of visitors from all nationalities and beliefs the construction goes high speed. Many people still see it as a Christian church; but it is not uncommon to find opinions of those who believe that the building could become a universal symbol of faith.

Gaudi died run over by a tram. He had just finished one of the four Bell Towers, the one dedicated to Saint Barthelemy. When completed, the building will have a central tower dedicated to the figure of Jesus. With 172.5 meters will be like a stairway to heaven. This will be one of the highest churches in the world but ti will always respect the size of the emblematic Montjuïc hill. Gaudí wanted to engage in a dialogue with the divinity but never overcome its creation.

Fast track entrance, no long lines, thorough visit, details and anecdotes that not everyone knows … this is how your tour of Sagrada Familia will be with Barcelonina & Co. your private trusted guides. Pepi Baulo www.pepibaulo.com