The tiny Barcelonas. Today: the neighborhood of Les Corts 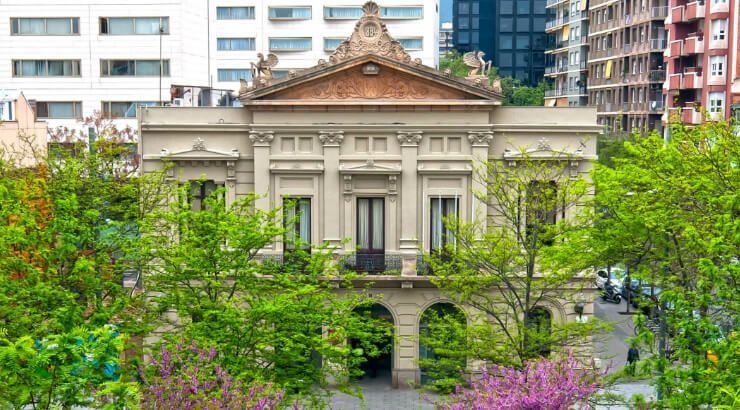 the neighborhood of Les Corts

Les Corts. A neighborhood of Barcelona that maybe you only know because this is where the Catalan football temple is located: the Camp Nou. This is no small thing, really, because on a game day more than 99,000 souls will attend the Camp Nou without counting the millions who follow it on television. 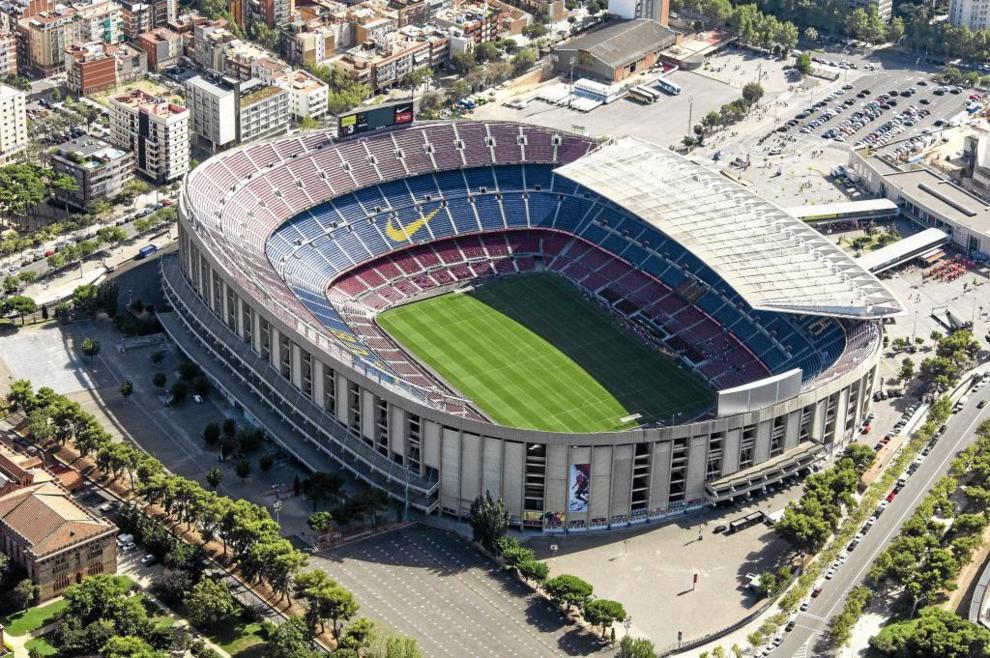 Let’s define what which area we mean when we speak of the neighborhood of Les Corts. Formerly it was a village made up of small farms at the foot of the mountains of Collserola. This rural town experienced a rapid and radical change during the nineteenth century, like other areas in Barcelona.

There are three areas in the neighborhood of Les Corts: Les Corts, La Maternitat – San Ramon and Pedralbes. Today I talk about the first two and leave Pedralbes for another tiny Barcelonas special. Let us begin!

It is not easy to describe the personality and set the limits of this neighborhood. Many locals know that. That’s because until 1812, in order to be a town, at least one thousand inhabitants were required and Les Corts did not reach that number.

A unique city council was set with Sarriá. At the same time, the lands are located under the road known as Travessera de les Corts bacame a part of the Sants area. In 1822, during the Constitutional Triennium, Les Corts obtained a City Council but it was “absorbed” by the city of Barcelona in 1897.

The areas that form the neighborhood of Les Corts are like a little puzzle. One is Camp de la Creu which takes its name from the ancient stone cross Magòria, a territorial signaling coming from the Middle Ages. The borders of Camp de la Creu are three broad avenues: Avenida Sarriá, Avenida Diagonal and Avenida Josep Tarradellas.
Near the street Jiménez and Iglesias and Paseo Manuel Girona, and taking the name of a historic farmhouse, we find Can Batllori area, important for its Iberian and Roman remains. Before the building was demolished grain silos, fragments baths and a necropolis were found.
The Camp Vell, between Joan Güell street, Numancia Street, Travessera and Avenida Madrid, sets the limit with the area of Sants-Montjuïc. It is formed by Can Novell, the Plaça del Centre and Can Sol de Baix. It is the area most recently development thanks to the fact of being close to the Sants Railstation.

Three key squares set Noves Les Corts area located above Travessera de les Corts: Can Rosés, de la Concòrdia and Comas. Here is were the most representative buildings ara located: the City Council, the Església del Remei, the Library of Can Rosés and the Can Deu Civic Centre.

So now you see, this small Barcelona is quite extensive so today, in Barcelonina, we will unveil only a part of its charms.

An area of contrasts

These radical changes, of which we spoke at first, are a part of the DNA of the neighborhood of Les Corts in which the architectural contrasts are more evident than in other neighborhoods of the city.

On one side we find small country houses and on the other bourgeois homes and today, tall modern buildings, almost all aligned with the Avenida Diagonal, notable examples of contemporary architecture.

Some examples of the oldest building are located around the emblematic Plaza de La Concordia.

One of the most charming spots in the neighborhood of Les Corts. With its church, kiosk, bar terraces, its lampposts and its old pharmacy … There, a palace of the late nineteenth housing the Civic Center Can Deu rises. A modernist house, a garden, a belvedere, a fountain, some palm trees and an enclosed terrace with beautiful stained glass where the cafeteria is located. Its low prices atracts a clientele of retirees, students, mothers with their children, neighborhood endearing characters and lots of tranquility.

A quietness that is not incompatible with a great cultural activity in their showrooms.

The actual remains of the old neighborhood streets are few but they manage to convey the feeling of small town with one-storey houses at most two floors, local shops, bakeries and very old bars… 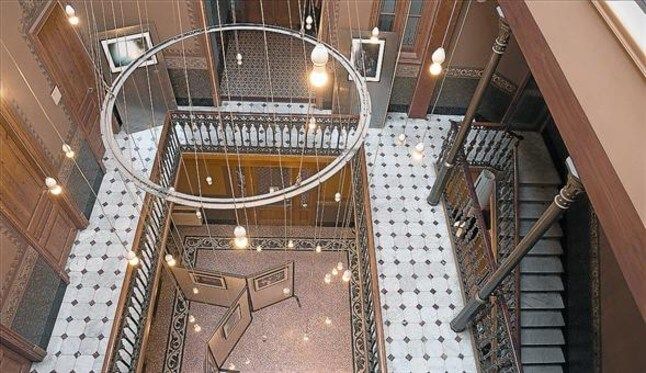 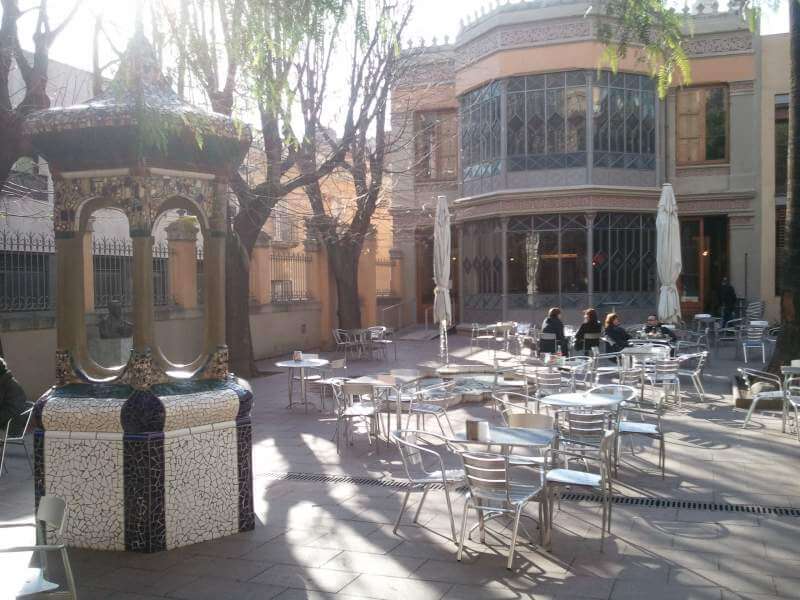 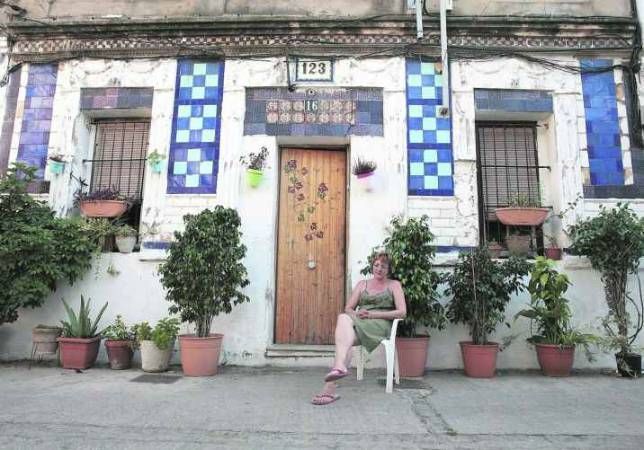 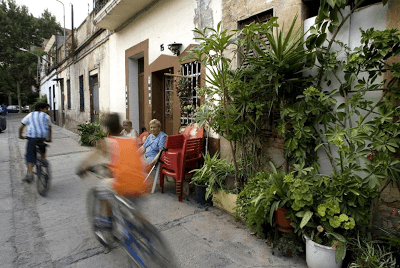 The Colonia Castells and the neighborhood’s memory

Les Corts has a personality and whole areas of low houses coexisted with new office buildings. This is the case of the aforementioned Colonia Castells a true “island” that for years was like stopped at the time of its construction in 1923.

His neighbors were a community of workers, many libertarians and fighters, who lost at least two battles: the Civil War and their fight against the vertical urbanism. They were one-storey houses, with chairs at the door, roof and a small garden with trees and even chickens. The group of squatters called Let’s save the colony that wanted to revive the neighborhood was dissolved in 2012.

At the end bulldozers were present but the case Castells is still open and some buildings are still standing.

Nothing suggests that few meters up, near the Diagonal, we find the glass towers of several banks, the headquarters of large publishing groups and communication (Planeta), luxury hotels (Hilton and Juan Carlos I), hospitals and shopping centers (such as L’Illa Diagonal building with a new concept of vertical skyscrapers, houses shops, offices, restaurants, parks and clubs like the legendary Sala Bikini.)

The neighborhood of les Corts today

At one end of the neighborhood is the beautiful building of the Old Maternity (since beginning of the decade of the 90 it houses the IOC headquarters) with a beautiful garden that only loses its tranquility during the football games. 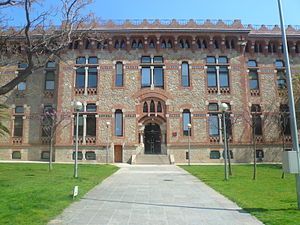 For the football amateurs have extra information in this post. In the Camp Nou they will find the official home of FC Barcelona, administration offices and the Museum of FC Barcelona, one of the most visited museums in Catalonia. In addition, they can also visit other “crown jewels” as the Mini Estadi; La Masia, residence for the youngest athletes, and the Palau Blaugrana, a sports pavilion where teams train and play sections of basketball, handball and hockey’s skates.

In short, Les Corts is a neighborhood to discover without haste, walking and going into its hidden alleys and bars where there will always be a villager willing to explain the afternoons of glory of the Barca team, the time of the fields and the latest masías or the story of “Pau Farinetes” the figure of a typical “pages” of these ancient lands today as a bronze statue in front of City Hall. See you in Les Corts!