The subterranean Barcelona III: how to be protected and to have fun being underground

Today we are still writing about the city under our feet.

One of the spots more upsetting spots is the anti-aerial shelters. Even if there is some previous ones, like the one under the Pati Llimona, it was during the Civil War when more than 1000 shelters were built. Today, we can visit some of them: the 307 in Nou de Rambla, the Palau de les Heures shelter or the ones in Plaça del Diamant or Plaça de la Revolució, in the Gracia area.
Without leaving Nou de Rambla Street, we have the basements of the Palau Güell, an ensemble of arches and vaults built with plane bricks designed by Antoni Gaudi which were used as stables and today they are preserved as they were back then.

Some of the best hidden basements in Barcelona were or are great clubs or bars, here you have some of them : the disappeared Sala Monasterio in the Vidal Quadres building, the Jamboree jazz club or the Sidecar, both in Royal Square , the Milano Cocktail Bar close to Plaça Catalunya or the Ommsession club, located on the basement of the OMM hotel. It has a cutting edge design, smart and cosmopolitan, and a strict dress code.
During the ’60, the Tuset Street was the center of the local modernity. One of the most emblematic spots was the Cova del Drac. The founders were Ermengol Passola and the writter Josep Maria Espinàs, who acted as a speaker the first years. The style was ahead of its time and they proposed music, exhibitions or poetry readings. For health and safety reasons it was moved to Vallmajor street, clo 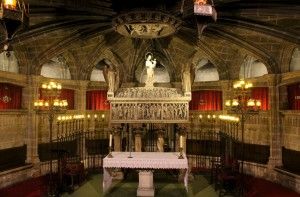 se to Plaça Adriano, but its golden days were left behind.

To end the posts about the Barcelona underground, here you have two crypts: the Sagrada Familia one, were Antoni Gaudi is buried or the crypt of the Cathedral of Barcelona form the 14th century. It is the house of Santa Eulalia’s sarcofagus, a saint patron of the city. As an and of this journey, Barcelonina proposes you a stroll around the Born area and the Ciutadella Park to end in a spa, Aire Barcelona, the old Arabian bath open to all of us.