Salvador Dalí or a three-strokes route

He is one of our most international genius. Even during Franco’s dictatorship, when Spain was isolated at there was no cultural life, the painter Salvador Dalí i Domènech, obtained fame and recognition. His eccentric personality and his innate sense of marketing helped to put Cadaqués, Figueres, Port Lligat or la Costa Brava at the top of the Catalan tourist destination during the sixties and the seventies.

Today, twenty-six years after his death, the brand “Dalí” is still working in the cultural market. Barcelonina has created the Dalí Experience to unveil the life of this extravagant artist discovering the places which have become a sanctuary for those admiring his work and his life. Let’s discover it! 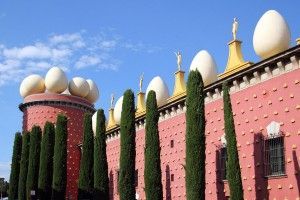 This is small village where the Theater-Museum Dalí is located in the old Theater of the city, which after the Civil War was in ruins. It was Dalí himself who chose it as a house for his heritage, this way he’ll be tied forever to the place who saw him born and die. The building is crowned by gigantic eggs, it houses paintings and sculptures which escape to any conventional stereotype.
The word “Theater” into the building name offers a very good lead about one of Dali’s creative concept: the scenography.

In 1968, Salvador Dalí bought a castle built in the XI century and a church form the XIV century. The restored following his particular ideas and converted it in a magnificent house as a present to his muse, Gala, who used it as a private residence until her dead, in 1982. Some iconic images like the blue Cadillac or the elephant-giraffe sculptures were taken in Púbol. The legend says that Dalí only visited Gala under a handwritten invitation.

This is were Dalí created his home with his wife and muse, Gala. This is an exceptional location and inside their home, Dalí created a personal universe to work in as well as the perfect scene for parties and performances. Some of the guests were names like Mia Farrow, Amanda Lear, Walt Disney, John Lenon, Andy Warhol, Rachel Welch or Francoise Hardy. A whole universe speaking about art in the XX century. A must see!

And to rest our minds, a nice stroll around Cadaqués, the most charming village in the Costa Brava area. Dalí was not the only artist who appreciated it: there are plenty of artist who have chosen it as residence. And if you love nature and wonderful landscapes, the Natural Parc of Cap de Creus. You might know that the capes look like the end of the world but knew ones are ahead, in the horizon. See you soon, Barcelonauts!