Step by step through the Modernism, a stroll with Barcelonina

Its name was the Path of Jesus and it used to connect the walls of Barcelona with the village of Gracia. The temps went by and the city walls were destroyed in order ot allow the city to grow according the the plan designed by Cerdà. The Passeig the Gracia was born.
The first buildings were detached houses with garden and conservatory and the competition to build the best houses started after the exhibition of 1888. Architects like Gaudí, Puig i Cadafalch and Domènech i Montaner were hired to built some singular buildings which gave to the city a new personality.

Barcelonina has designed a special tour to let you know this emblematic street. The tour starts with a stroll along the Passeig de Gracia, a visit to the MNAC (National Museum of Catalan Art) ending with a visit to the Sagrada Familia, Antoni Gaudi’s master-piece.

Today we’ll let you know about the stroll amongst the glamour, the architecture and the history of the Passeig the Gracia and its buildings.

We’ll start with the building located in the number 21 where, with its cupola completed by a sculpture of the Phenix, we find the Union y el Fenix building. Desinged between 1927 and 1931 by Eusebi Bona Puig and Frederic Marés.

Crowned with a very original weather-vane, we have the Palau Malagrida, a urban manor built in 1905 by Joaquim Codina for Manuel Malagrida, who came back from Argentina with a big fortune. This building hides a lot of symbolism related to its patron.

We’re arriving now to the “block of the discord” located between Arago Street and Consell de Cent, where the most 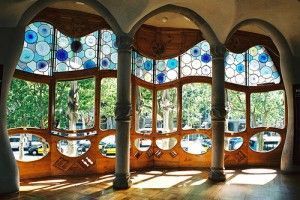 prestigious architects compete in originality and quality giving to the city one of the most importants Modernist ensemble.

Lluis Domènech i Montaner is the designer of the Casa Lleó i Morera, located in the number 35. Built between 1902 and 1906, it has survived the Civil War and further renovations.

The Casa Amatller has been restored recently and since March 2015 this is possible to visit it. The catalan chocolate maker, Antoni Amatller hired Puig i Cadafalch who desingned a building breaking with all the rules.

In number 43, we find the Casa Batlló, by Antoni Gaudí. The original house had been designes by Emili Sala and Gaudí was renovating the front but he added two floors and design the interior layout. 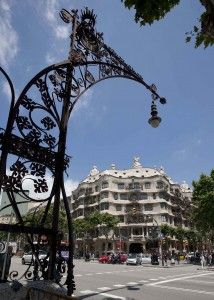 In the number 53, many years ago, a tea room opened its doors: The Salon Rosa (the Pink Saloon). Years later, with the boom of the department stores the building became the Boulevard Rosa.
Close to the Diagonal Avenue, we find the Robert Palace desinged by the french architect Henry Grandpierre, built for Robert Robert i Suris and today the hause of the Tourist Information Office.
Pere Falqués i Urpí is another name very important for this boulevard, he was the designer of the 32 lamp-streets with a bench. They were design in 1906 and they give to the Passeig the Gracia more personality (and a place to seat to catch or breath).

If you come to Barcelona in April, do not forget to bring a nice hat to joint the Stroll with a Hat, organized every year in this street. Happy Passeig de Gracia.