The Quatre Gats. Santiago Rusiñol and his friends have fun

Art and architecture, Eat and drink, To visit 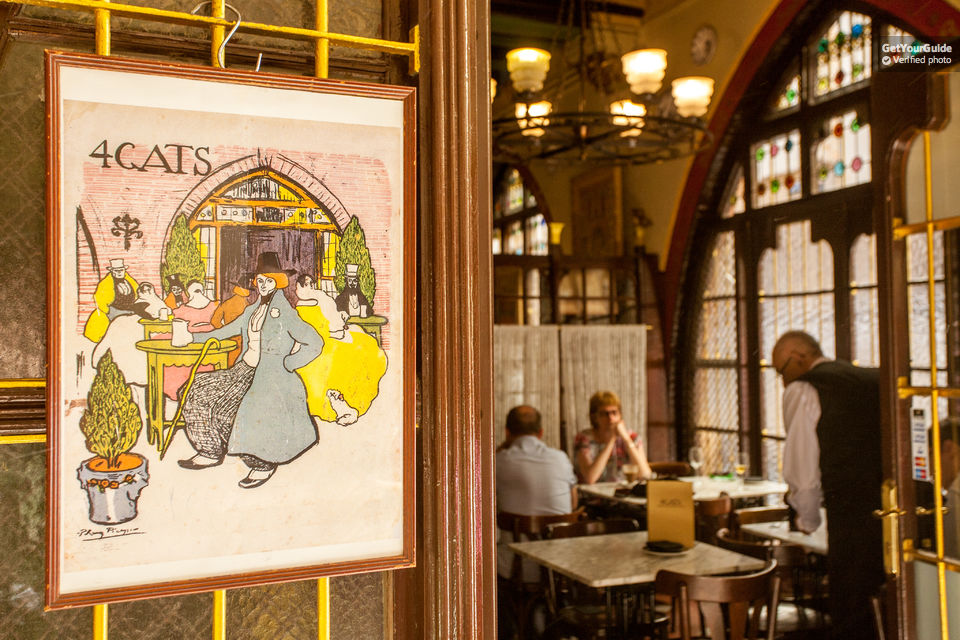 If when somebody asks you if there were many people somewhere and you say “Bah, we were just four cats” that might look as a negative answer. This is just the opposite if we talk about the Quatre Gats, the tavern which became the heart of the modernist bohemians for many years.

Walking down along the emblematic Porta de l’Angel street, we’ll find in our right the Montsió street, and since 1897, this picturesque bar which was managed by the not less picturesque Pere Romeu. This tall man, half artist and half businessman was painted by several painters and friends as Santiago Rusiñol, Ramon Casas, Joaquín Mir and Miquel Utrillo. Encouraged by his friends, Romeu decided to open a tavern which become the center for gatherings and exhibitions. Romeu had worded in the Chat Noir in Paris and he wanted to create the same atmosphere in Barcelona.

An he succeeded, indeed. To start, he opened his bar in the ground floor of a modernist building known as Casa Martí and designed by the well known architect Josep Puig i Cadafalch, who is the creator of emblematic buildings like the Casa Amatller or the Casa de les Punxes. Its rooms had an eclectic decoration as other modernist houses and within its four walls, Picasso made his first exhibitions and a new magazine was born: the Quatre Gats.

The Quatre Gats. Santiago Rusiñol and his friends have fun 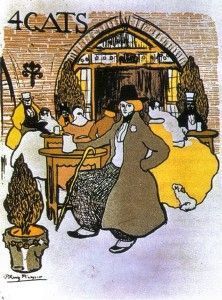 Musicians like Isaac Albéniz, Enric Granados and Lluís Millet visited this singular tavern as well as the architect Antoni Gaudi, the painter Isidre Nonell or the illustrator Ricard Opisso. The list is endless. The fame of the local was really big the money wasn’t. Romeu had the bad good habit of not cash or give credit. In 1903 he was forced to close his business. Until the Civil War, the building was the venue of the Circulo Cultural Sant Lluc and afterwards it lived a decadent period until it was re-opened during the ’70 under the same name and refurbished during the ’90.

Inside, you’ll be surprised by the coffeehouse in the entrance, with rustic elements and dominated by the famous painting Tandem, by Ramon Casas (the original is in the National Art Museum of Catalonia) and ceramics with floral designs which contrasts with the art-decó decoration of the dining-room: the lamps hanging on the columns, the mezzanine in wood with tables for two and the piano to live up the evening.

But if you like the interior, you’ll be carried away by the facade: the oval arches with the stained glasses, the forge in the balconies, the Eusebi Arnau sculptures or the image of Saint Joseph, by Llimona. Its a legendary building.

Despite of the amount of tourist who visit the tavern everyday, the barcelonians still like to go. This is a real pleasure to sit there and just imagine the artist, rebel sons of the Catalan bourgeoisie o young artists just coming from Paris. You might heard them asking for absinthe. Probably you should pay for them or Romeu just will give them some credit. Little stories from the History.

So you know now, Paris had a Chat Noir, but Barcelona, four!