Barcelona doesn’t exist. Do not panic! I mean there isn’t just one Barcelona. Better, isn’t it? Barcelona is a transformer city, with the capacity to show a different face to each guest. It can be a big metropolis and at the same time be the home of neighborhoods which look like villages, such as Sarria, Sants, or Gracia. Probably the perfect example would be this corner named after a diminutive: The Barceloneta.

Today, with the buzzing of the tourist, walkers, sellers and bars and restaurants it becomes difficult to imagine that until half the

XVIII century this area was uninhabited. It was just a peninsula gained to the sea thanks so the sediments around the Maian’s Island. Soon, the big city, Barcelona, realized the possibilities of this little Barceloneta. At the beginning it was the perfect area to relocate the neighbors of La Ribera and since the area was organized in a chaotic way, the authorities had to find our an urban and military plan, since the city was under military government. This is the reason why in spite of being a popular area or fishermen and workers of the port, its streets have been traced by drawing pen and the original buildings have a very singular style.
This symmetry got lost with the growth of the city but the Barceloneta is still a singular ares. For this reason, the architecture amateurs will find notables examples as well as an area with a foundation date: 3rd of February 1753.

Little by little the area got inhabited by fishermen and port workers. Later, industrial workers related to shipyards arrived followed by decadent times and some transformations, like the one for the Olympic games of 1992. It might sound weird, but Barcelona and the locals have lived with their back turned to the Mediterranean sea and the Barceloneta, with the “chiringuitos” and restaurants on the beach, the Golondrianas or the San Sebastian baths, was the only contact point between them and the sea. 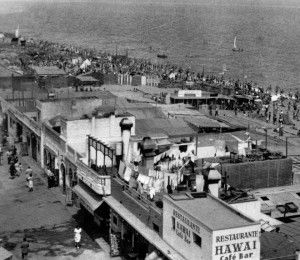 Today, the area lives its contrasts and tries to find a personality. It has at its back the modern buildings of the Icaria avenue and just in front the well-known W Hotel or the luxury yacht docked at the marina. But if you have a look inside, its tiny streets invite you to discover hidden gems such as the bookshop Negra and Criminal, the old bars like the Electricity or Bar Leo,the fountain dedicated to Carmen Amaya, the Church or the arche to remember one of the most important factories of the Catalan industrial revolution: la Maquinista Terrestre Marítima.

Before walking inside the Barceloneta, we can visit de Palau de Mar building, located in Pau de la Vila Square, home of the Museum of Catalan History. Upstairs, we have a nice restaurant with spectaculars views of the Port and downstairs, the restaurants which announce the wide gastronomical offer of the area. If we are not very hungry, we can just walk to the Moll dels Pescadors (The Fishermen Dock) to find the old lighthouse from 1772 transformed in clock-tower. Its shape is today reflected in the windows of the modern Maremagnum.

But if we are looking for a beach, we should just walk straight to the see. To be honest, the beach is not paradisaic but is really full of life. People practicing yoga, sports or just dancing, sellers, masseurs, sand artists, musicians…the last sensation? Open air cinema in the beach. Everything is near, handy, nighborhoodish…the clothes getting dry and neighbours talkint at the door, traditional tapas or new fruit shops, old caves or new surf shops…the tiny Barcelona is huge!

This last days, the uncontrolled tourist apartments have been bothering the neighbors, usually very welcoming, and to find the formula to balance the fun and the comercial interest with the quality of life and a sustainable development for all of us is needed.

And to end with the best of the feelings, here you have this theme of the local musician Josele Sangüesa, who knows very well the area and composed this song under the Barceloneta moon. Here Josele performs with another musician in love with the Barceloneta: Santiago Auserón.
Caníbala – Chula de playa