Montcada Street and the Picasso Museum. A relationship of stone

The disagreement of Picassso with Franco didn’t make the task of opening a Museum to show his paintings. During the fifities, it was not possible neither in Malaga nor in Barcelona. Finally, his loyal friend and secretary, Jaume Sabartés, managed to open a private collection with the agreement of the city council and the Mayor, Josep Maria de Porcioles. Even if today the Museum has over 3500 works, at the beginning there were a lot less. Today, we can enjoy master pieces like The Arlequin, his reinterpretation of The Meninas or Portrait of Jacqueline...
But, allow us an advice: please, take time to visit some of his less known works like the 42 ceramic pieces given by his widow, Jaqueline Roque in 1982.
We’ll talk some other day about this almost “secret” work, today we want to talk about the stones which accommodate a part of the huge Picasso’s production.

Five Palace in one for the Picasso Museum

The building is as interesting as the Museum itself. There are five works of the Catalan Gothic, old residences of the richest families of the city, back in the 13th century. They have been refurbished century by century becoming interesting architectural pieces.
Located in the Montcada street, which starts in the Romanesque style Marcús Chapel to finish in the Born Square. A long streer until the 19th century, when it was divided by the new Princess street.

The Picasso Museum stone by stone

Five Palaces in the Montcada Street have been “conquered” by the Museum to accommodate the huge production of the artist. The first headquarters were in the Palau Aguilar (15 Montcada St.) where some remains of a big fresco were found. Today, this fresco is in the National Museum of Catalan Art.

The Palau Aguilar was bought by Berenguer of Agilar in 1400 and the family was the owner until 1837. From there, the palace belonged to the families Clerch and Pons and in 1953, it was bought by the Barcelona town hall for a major renovation because the building was in a very bad condition.
Today, this is where you can marvel at Picasso’s performance of Velazquez’s Meninas and an original 17th century coffered ceiling.

Afterwards, the Baro de Castellet Palace (17 Montcada St.) which has the same structure than the other palace in the street: built around a central patio with a big staircase and some arches. Those are the patios where we can see the tourist taking a break. The Palau du Baró de Castellet facade retains a religious theme relief from the 16th century and inside a neoclassical style living room. In fact, it is in this room where you will admire the ceramics given by Jacqueline, the Picasso’s last wife.

The last big extension was the Meca Palace (19 Montcada St.) the Windows Palace (23 Montcada St.) and the Mauri House (21 Montcada St.) being this last one famous for being the property of the Mauri family, one of the most famous pastry chefs in Barcelona.

The Casa Mauri is the only building built recently, in the 18th century on top of the foundations of a villa of the Roman Barcino. In addition, on the facade there is a lattice, this kind of window used by women of the time to look at the street without being seen.

Regarding the number of visitors, the Picasso Barcelona Museum sells more than one million tickets each year. That’s why we strongly advise you to buy your tickets in advance but if you want to discover Picasso’s Barcelona and its museum, a guided tour is ideal. 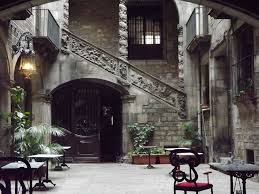 And one more Palace

The Montcada Street is one of the most interesting centers of Gothic civil architecture in Barcelona and we can find more noble constructions besides the ones accommodating the Picasso Museum. We can not write about all them but if you have a minute, do not miss de Dalamases Palace (20, Montcada St.). It was built during the 17th century and what we see the remodeling of an old Gothic building.

If we close our eyes, we can see some nobles walking along the street as well as some stressed traders. And a white haired man will appear, with big dark eyes and a sailor t-shirt. Hi Pablo Picasso, here you have some friends.