To go out, To visit 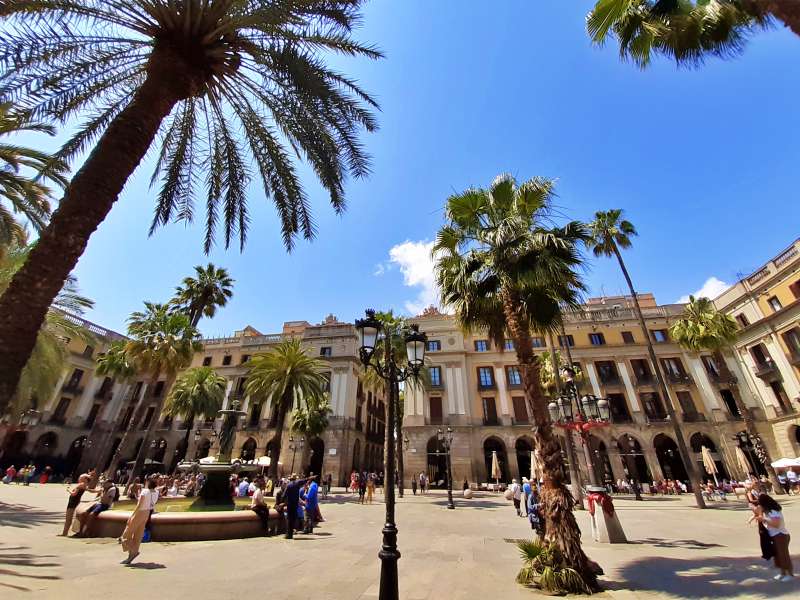 Do you know the Royal Square (Plaça Reial) in Barcelona? Surely you have or have seen it in thousands of postcards and Instagram photos. It is one of the busiest points of the city and yet keeps the light and tranquility of a classic square. Today we will talk about some of its best kept secrets.

All began with a convent

It’s hard to imagine that, on the site of one of the most emblematic squares of Barcelona, ​​the Plaça Reial, was the tranquil convent of Capuchin monks of Santa Madrona. And who would have said that this work made in 1848, by the architect Daniel Molina in a balanced neoclassical style, would be what it is today: a meeting place for the liveliest Barcelona.

This is a large square in the style of the Europeans of the time, but no commercial galleries or theaters were built in it, as in Paris or Prague. The style of its buildings is quite uniform with a porticoed ground floor and the facades adorned with classic terracotta motifs, busts of sailors and American explorers and Indian shields.

Its construction displays a singular disposition of the architectonic elements getting that the square seems quadrangular when in fact it is trapezoidal. The architect was brilliant by accommodating in its structure several passages that connect the space with the alleys of the medieval layout that had been cut by the square.

The most observant will see that the street lamps are very original. The reason is that they were designed by a genius that was not yet well known at the time: Antonio Gaudí.

Imitating the branches of a tree, with that love for natural forms that characterized the architect, the street lamp is supported by a foot of black marble and, at the top, you can see snakes entangled with the symbols of the god Mercury protector of commerce , just one of the most important activities in Barcelona.
This magnificent model had to have been that of all the streetlights in the city. But they were too expensive so there are only five copies: two in this square and three in Pla de Palau. As you can see, the presence of the works of the architect Gaudí is a recurring theme in all the neighborhoods of the city.

The fountain of the center, which represents The Three Graces, was built in 1876 and designed by a Frenchman, Antoine Durenne, author of several monuments in Spain, specifically in Huesca and Malaga. When it was inaugurated, there was also a statue of Ferdinand the Catholic in the square, but it was smashed with stones. Some other violent incident took place between these columns but fortunately the joy has prevailed in the place.

A Square with an arty touch

One of its buildings houses the Setba Foundation that has its origins in the cultural projects of Setba Zona d’Art, a multipurpose space destined to the promotion of art and culture. Here there are exhibitions and conferences but, in addition, it is worth mentioning that the Catalan philosopher Francesc Pujols (Dali’s intellectual “father”) and the mythical Bohemian agitator Ocaña lived there, a symbol of the transgressive Barcelona of the post-Franco period known as the Transition. There also lived the famous singer-songwriter Lluís Llach and worked the sculptor Josep María Subirachs. The Foundation can be visited a few months a year and the most interesting thing is that, since 2012, it has gathered a file with the memory of the Plaça Reial with works and objects its most emblematic inhabitants.

In the 1980s, the architects Frederic de Correa and Alfons Milà remodeled the plaza, added its characteristic palm trees and suppressed traffic. Precisely, in the number 18 of the square is the MBM architecture office that has the famous Bohigas, Martorell, Mackay, Capdevila and Gual. And there is also the writing of the leisure magazine Time Out Barcelona.

But really this place is known for being one of the places with more tourist charm and for its leisure offer that materializes in its terraces and bars. Especially in two of its flagship establishments: The Jazz Jamboree hall and the flamenco club Los Tarantos.
The Jamboree stage has been attracting the performances of international jazz figures for years. Recently it has also opened to other styles and, at dawn, it becomes a great dance club.

This multi-faceted square also has the Sidecar and Karma concert halls and the mythical Glaciar bar.

To mention some places already disappeared, we will tell you that the nº8 opened its doors the Pedagogical Museum of Natural Sciences and the Spanish Grand Café frequented in its golden age by celebrities such as Ava Gardner, Mario Cabré, Joan Miró and Salvador Dalí.

And if we talk about local is essential to visit the Ocaña; a restaurant as original as the character that gave it its name: José Pérez Ocaña. As mentioned, he was a transvestite and icon of the counterculture that “reigned” in the square along with famous artists such as the cartoonists Nazario and Copi.

From here, and after a refreshing beer, you can visit: La Rambla, the La Boquería market, the Liceu theater, the Sant Jaume square … and endless places in the top ten of Barcelona.